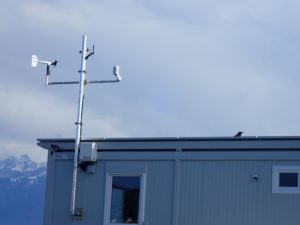 The Campbell Meteostation is composed of a CR1000 measurement and module control for data transfer. The following sensors are mounted on a tripod, fixed on a mast at 5 m above the water:

You can check the data in Datalakes. 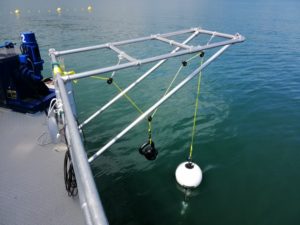 The data is connected in real time to Datalakes. 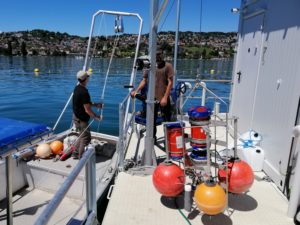 These ADCP are directly connected to the data system and can be consulted liv on Datalakes. You have access to: the flow magnitude and direction upward an downward, the near surface velocities and the deep velocities, as well as the calculated heat fluxes. 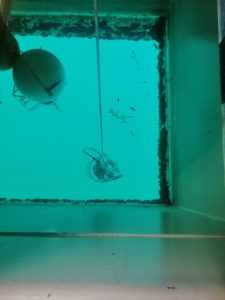 The Idronaut profiling system is installed in the cabin near the internal moonpool. It automatically takes vertical profiles down to a depth of 60m, every 1 to 3 hours throughout the day.  He is composed of a OCEAN SEVEN 16Plus CTD probe, that includes temperature, conductivity, pressure, optical oxygen, pH and redox sensors. In adition, there is a Chelsea Trilux Fluorometer, that measures Chla, Phycoerythrin and Phycocyanin, and a LI-193SA spherical quantum sensor to measure Photosynthetically Active Radiation (PAR). 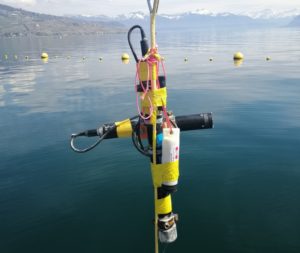 From October 2018 until March 2021, the PP mooring was managed by the two projects Primary Production and CARBOGEN. Every ~6 weeks, the sensors were removed, cleaned, quality checked and then redeploy. The following sensors were deployed within the surface layer down to 30m:

Since March 2021, the CARRTEL team is managing the OxyPar Mooring with two sets of oxygen and PAR sensors. Every 6 weeks, the set of sensors are directly exchanged on site. Back in the laboratory, the exposed sensors are quality-checked against a reference sensor and prepared for the next deployment. Within each sets, the following sensors were deployed: 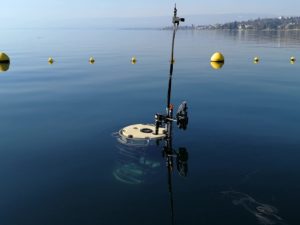 Thetis is an Autonomous Moored Profiling Platform developed by Wetlabs.This high-tech instrument gives complete bio-optical water properties, and will be used as calibration for remote sensing. It is installed in the protection perimeter and takes vertical profiles from a depth of 50m to 0.5m at different frequencies (every three hours to twice a day). Be aware that there are gaps in time due to technical issues and maintenances.

Data is transmitted in real time via GSM, when Thetis is at the surface, and automatically uploaded onto Datalakes. Vertical profiles of oxygen and from the CTD, as well as the calculated depth time grid of multi-parameters are available within the core data.

The set of modular sensors installed are: 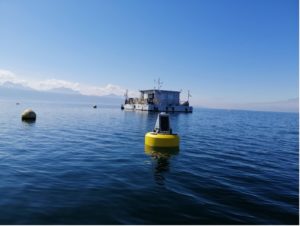 The SeaView SVS-603 Wave Sensor is a highly accurate inertial sensor housed in a Nexens solar powered data buoy, that is reporting heading, wave height and period as well as wave direction. Data are transmitted live onto Datalakes.

Back to Conduct your research